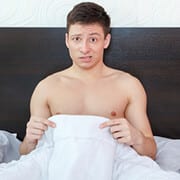 Penis lenght: most men are unsatisfied with the length of their penis.

Men are generally self-confident. But if the issue of penis size comes up, most are rather silent. The reason is that many men tend to be dissatisfied with the length of their penis.
There are countless aids that try to remedy this: There are creams, pills, mechanical penis expanders, electrical penis extenders, belts, straps, penis weights and penis pumps in various shapes and designs. But few products actually make a difference like the vacuum expander does for example.

Some studies deal with the influence that the length of a penis can have on the psyche. A study published in the “British Journal of Urologyâ€œ states that 45 percent of men are unhappy with the length of their penis.
Although women always stress that size is not an issue the reality unfortunately appears to be a little different. Penis size does play a big role. The results of anonymous surveys show that if all other criteria were the same, women will always choose the man with the biggest penis.
Even if we leave out the female sex, men with a big penis have more confidence. The opposite of this is insecurity if the penis is too small. This can even develop into a serious mental illness “small penis syndrome” whose consequences can lead to depression and even suicide.

penis length: Is a penis really too short?

These days there are numerous studies into the length of a penis. Most studies prove that German men are only “average” sized on an international scale.
Thus, the renowned faculty of medicine at Kings College London published a study about the length of penises in march 2015, see . Here, the penises of 15,521 men were measured worldwide. In an erect state the global average length of a penis is 13.12 centimetres. When flaccid it is 9.16 centimetres long. The circumference of a flaccid penis is 9.31 centimetres and 11.66 when erect.
The Germans lie once again in the middle with an average length of 14.61 when erect.
These studies and the already existing insecurity of men have lead to the creation of a specific line of business in the sex industry. Questionable ointments, creams and pills promise to increase the length by several centimetres. Unfortunately these remain as promises, as the majority are completely ineffective.
Only two methods exist which demonstrate real long-term growth and thickening of the penis. These are the operational method and the use of a penis expander. Both methods have their pros and cons but only the penis extender works without surgical intervention.

What does a stretching mechanism do?

A relatively simple but proven method is the penis expander. The fact that this method is rarely prescribed by doctors, is not due to its ineffectiveness but because of its poor success due to misuse and incorrect equipment.
The urologists Paolo Gontero and Marco Oderda from the University of Turin have completed multiple studies comparing the effectiveness of various methods of penis enlargement. They revealed that a permanent increase in length from 0.5 to 2.3 cm can be achieved through professional penis extenders and penis pumps. However, many stretching extenders are far too strong and a penis pump can only have a vacuum of max. -0.13 bar.
Their effectiveness is linked to a high degree of discipline. In order to achieve an effect, the penis extender must be used 4 times a week for 6 – 8 hours a day. Another pleasant effect of the penis pump is that the penis does not just increase in length but the pump also stimulates an increase in circumference.
Scientist Graham Rutherford and Anne Henke have researched into this area. The use of mild, controllable penis pumps has led to a long-term strengthening of the erectile tissue, penile muscles and also psychosomatic aspects.
The Vacuum Extender vitallusPlus® made by us meets these requirements.

Erectile training: the penis can shrink over time. But do not worry, a retracted penis does not have to be a permanent state. The magic word is vitallusPLUS®.