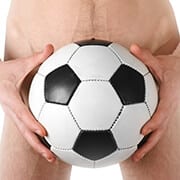 With ageing comes a number of side effects which you must largely accept.

The body is changing and is less efficient due to slower cell divisions. Bone density increases, general conditioning and strength as well as stamina decrease. The hormonal balance shifts.
The latter is also responsible for another symptom of old age which is rarely spoken about – the atrophy of the penis due to inactivity.

The atrophy of the penis due to inactivity is a breakdown of tissue which is no longer used regularly.
Athletes know this physical reaction due to the breakdown of muscles they experience if they are no longer exercising regularly.

This ageing process affects the entire body, as well as the penis. Due to inactivity, the penis can shrink between one to three centimetres with age. This process usually begins for most men around the age of 30 and continues until the end of their life.

The male hormone testosterone is responsible for this, it is produced in the testes and control sexual drive. With age, the testes always produce less testosterone which is accompanied by a decrease in libido. In other words, men seldom want to have sex.

In order to prevent a reduction (shrinking), regular penile training is needed. This does not just prevent the penis shrinking but also increases its overall fitness level.

The best and most convenient way to prevent a reduction is regular sexual activity. However, up until now experts have been unable to agree on a precise definition of how often “regularly” is. The vast majority of scientists advocate that it is necessary to have sexual intercourse three to four times per week in order to prevent penis reduction.

Penis pumps are also helpful in preventing this

As numerous medical studies have shown, vacuum therapy with the appropriate penis pump is one of the most effective methods for long-term penis enlargement and to avoid a reduction in length. Here, it is important that the vacuum is a maximum of -1.3 bar and it is used very regularly and continuously.
Manual exercises are recommended for the prevention of penis reduction due to ageing. These are also known as jelqing and stretching.

What do you do if the penis has become smaller? Most men notice relatively late that their penis has reduced by a few centimetres.
But even this can be reversed with targeted penile training and taking.

The patented vitallusPLUS® penis extender helps to permanently enlarge the size of a small penis. We would be happy to advise you by email.