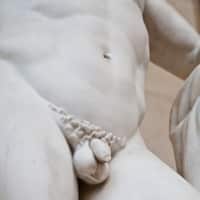 Is a small penis really unattractive?

The man of the world is proud of his large sexual organ because he associates it with power and strength. But that was not always the case. If one looks at the ancient statues of men, usually they look well formed and muscular, but the penis is quite small. What is the reason for this?

Ancient statues and their most precious piece

Earlier, scientists puzzled over why the statutes of otherwise athletic men from antiquity had such small genitals. Some believed that a small penis made the total work of art seem less pornographic because the viewer’s gaze did not automatically stop there. But there were other interpretations. For example, a small penis was interpreted by the Church as noble reserve and chastity.

However, the real reason was quite different. As has been discovered in the meantime a small penis quite simply corresponded to the then ideal of beauty. The attractive man of that time had, according to the ancient Greek dramatist Aristophanes, light skin, broad shoulders and a shiny chest as well as a small tongue, strong buttocks and a small penis.

Equally barbaric at that time was any body hair below the head. The ancient man was intelligent and reserved, he could have sex at any time but without having to brag about the size of his genitals because what mattered was the class, not the mass. A large penis stood for ugliness, impatience and stupidity. This is proven by the representations of men with oversized genitals as satyrs or the god Priapus, of which such features were rumored.

An ideal of beauty through the ages

Today’s male sees this very differently. In our time, a smaller penis is regarded as a weakness and men who are not so well endowed like to keep this a secret or try with different means to get closer to their ideal of beauty. But no man has to be satisfied with what he has because a small penis no longer needs to be a reality.

Growth of the penis in both length and width

A penis pump, also called a vacuum pump, can gently help the male to newer dimensions and thus increase the quality of life. A conventional penis pump was only used in earlier times to help men have an erection, for example, after a serious illness or in old age, today thanks to the  “Vacuumextender” from vitallusPLUS® through a new and gentle method, the penis can be increased in length and width in a gentle and sustainable way.

Today a large penis is considered sexually appealing. vitallusPLUS® can help you to get your dream penis.